Tips From the Bar: Nice Fedora 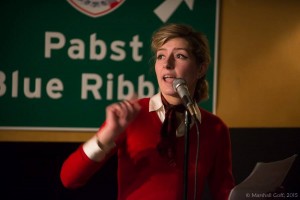 Chloé Cunha is a poet, screenwriter, and occasional sapphic vampire, such as in the upcoming film Blood of the Tribades (2016), or when in good company. When not dorking out about weird, surreal movies, she is probably dorking out about any number of other things, as she exists in a near-constant state of dorkiness. As a regular of the Cantab Lounge she is ecstatic to be featuring and looking forward to ordering a drink from the stage.

She once won a contest for Poetry Business Manager by writing a ghazal about Justice Antonin Scalia having a one-night stand in his voice, using many of his own words. It was truly disgusting and she is very proud of it. She has featured at BPS’ monthly queer reading Moonlighting, and her work has appeared on the Scout Cambridge website, Electric Cereal, Amethyst Arsenic, and the upcoming erasure anthology Bye-Bye Bukowski, from Hyacinth Girl Press, edited by Sarah Xerta. She is also co-host of the Encyclopedia Show Somerville.