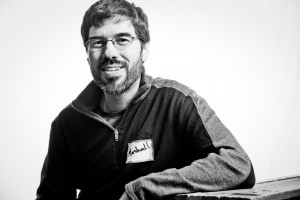 Marshall Goff, in a rare shot from the other side of the lens. Photo by Jason Liu.

Being friends with a SlamMaster has an impact. Marshall Goff went to his first slam because Simone Beaubien needed a new picture, and now he’s proud that he took a bunch of the pictures on this site. He’s even prouder that he knows enough of the poets in the Cantab community that he’s never been asked to be a judge.

Marshall developed an interest in photography after seeing a book of unbelievable nature and adventure photographs by the late Galen Rowell. Twenty years later, he realized he couldn’t call himself a wannabe nature photographer anymore, since 80% of his pictures have people in them. His photographs have been used by musicians and poets; he’s gotten the cover of a national magazine shooting Ultimate Frisbee; and he was pretty insufferable for a while after getting accepted into the Annual Juried Show of the Griffin Museum of Photography. 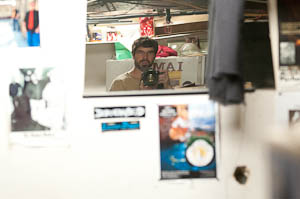 Self-portrait by Marshall Goff, backstage at the Cantab Lounge.

Expressing the art of performance poetry in a single moment presents a stimulating creative and technical challenge. Those challenges are greatly exceeded by the generosity of the performers, and Marshall is forever grateful for the opportunity.

Six years of shooting poetry has created a library of thousands of photographs. Anyone who’d like to see or use some of those pictures may get in touch with him mg@marshallgoff.com. Hopefully, some day soon, Marshall will rebuild his site at marshallgoff.com to show more of those photos, too… In the meantime, you can keep up with him at Marshall Goff Photography on Facebook.