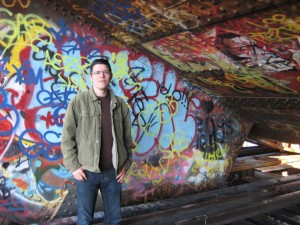 A sporadic musician armed with a Library Science degree, Michael F. Gill has lived and loved in Boston since 1999, but only in 2010 did he finally make it down to the basement of the Cantab Lounge. He was lured on the promise of hearing the best open mic in the English-speaking Language, and that he would get back his salad bowl that Lucie and Michael Monroe borrowed from him. He became a regular reader and listener instantly.

Aside from working the door at the Boston Poetry Slam, he runs the Brighton Word Factory (a bi-weekly writing group in Boston,) co-hosts the Stone Soup poetry readings in Cambridge, and helps organize the 365/365 challenge, an online group designed to stretch one’s writing abilities in community with other poets. His website is http://www.bbtp.net. He is happy to speak with you about many things.