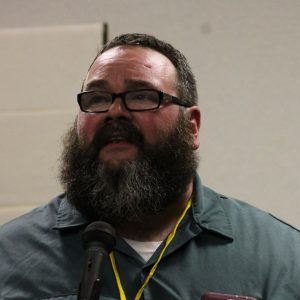 Zeke Russell, on stage at the 2016 National Poetry Slam. Photo by Christopher Clauss.

Zeke Russell grew up in Central Maine surrounded by artists and lumberjacks. Since then he’s been a cook, a teacher, a security guard and a social worker. In 2008, while living in Lowell, Mass., he rediscovered poetry through the performance zine OutLet. This led him to the Mill City Slam, and thence to the Boston Poetry Slam at the Cantab Lounge. He moved to Boston in 2011.

Zeke competed in the 2015 Boston Poetry Slam Team Selection Finals with a torn quadriceps using a walker. This feat has never been duplicated. He was a member of the 2011 Mill City Team and the 2016 and 2017 Boston Poetry Slam teams, reaching the semi-finals of NUPIC 2017 where he lost to the eventual champion. As the 2017 Boston Poetry Slam World Qualifier Champ, will represent the venue at this year’s Individual World Poetry Slam. His work has appeared in Drunk In a Midnight Choir, Wyvern Lit, Maps For Teeth and Printer’s Devil Review.