The 2014 Boston Poetry Slam Team was selected through a multi-night slam gauntlet completing on March 26, 2014. The top five poets after three nights and seven poems will travel to the National Poetry Slam in Oakland, California in the first week of August. All five team members are NPS veterans, comprising multiple Finals-stage appearances and more than two decades of national competition. The team may be booked as a group or individually in the months leading to NPS by contacting slammaster@bostonpoetryslam.com. 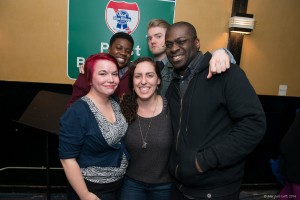 Janae Johnson was the top scorer in this year’s Boston Poetry Slam Finals. A queer, black, Stevie Wonder-loving, Jamba Juice-sipping, slam poet, educator, and activist, with a jock’s mentality and a poet’s heart, Janae brings all sports and no games to the slam. She ranked fifth at the 2014 Women of the World Poetry Slam, was the grand slam champion of the 2013 Lizard Lounge Poetry Slam, and serves as the coach and advisor for the Simmons College poetry slam team. Inspired by uncomfortable silences and midnight bus rides, Janae uses her poetry to shed light on issues of racial inequality, homophobia, and the nuances of love.

Born and raised in Southern Virginia, the house where Sean Patrick Mulroy grew up was built in 1801 and was commandeered by the union army during the civil war to serve as a makeshift hospital. As a boy, Sean loved to peel back the carpets to show where the blood from hasty surgeries on wounded soldiers had stained the wooden floorboards. Now he writes poems. Sean has slammed for teams from Hampshire College to NYC to Omaha, but has resettled in Boston for back-to-back stints on the venue that brought him to slam: this is his third year on the Boston Poetry Slam Team.

Meaghan Ford is a writer from New Jersey who fell in love with the big city shit. She was a 2012 Write Bloody Publishing finalist, a 2013 Exploding Pinecone semi-finalist, and represented Port Veritas at the 2014 Women of the World Poetry Slam. Some of her work has appeared or is forthcoming in New Verse News, The Orange Room Review, and Danse Macabre. Like all good punk girls, she carries a knife.

Melissa Newman-Evans was a member of the 2012 Boston Poetry Slam team, currently co-coaches the Emerson College slam team, and has headlined poetry shows around the northeast. Her work has been recently published in Muzzle and Side B Magazine, and is forthcoming in PANK, Radius, and decomP. She likes her lipstick red.

Performance coaching for the 2014 Boston Poetry Slam Team is coordinated by Simone Beaubien.