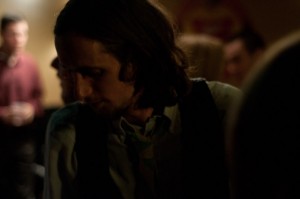 Brian S. Ellis takes a breather between hosting poems in the slam at the Cantab. Photo by Marshall Goff.

Brian S. Ellis started coming to the Boston Poetry Slam at the Cantab Lounge on a regular basis in the fall of 2005. In the winter of 2006 he competed in his first slam. Two weeks later he won his first slam, qualifying him for the 2006 team. He was living in his car, on Cape Cod, at the time. He used the last of his money to pay for the gas to compete in the 2006 team selection finals. He made it on the team, and then lived in Boston for the next five years. 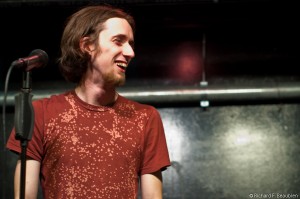 Over the years, Brian has competed for the venue’s coveted Champion of Champions title seven times: once versus Omoizele Okoawo, and six times versus Adam Stone. Adam and Brian have bested each other three times each.

Brian hosted at the Cantab from 2009 through 2011. In 2011, he coached the venue’s slam team at the National Poetry Slam in Boston.