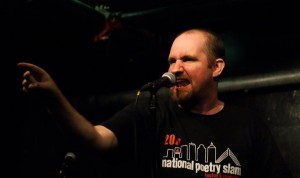 Since then, Adam has represented venues at the National Poetry Slam twelve times: Cape Cod in 1999; Boston-Cantab in 2000, 2003, 2004, 2006, 2010; The People’s Republic of Vermont in 2001; the Lizard Lounge in 2002, 2005, 2007; the Worcester Poets’ Asylum in 2008, and the Brew’d Coffehouse in Lowell, MA in 2013. He was twice selected to represent the Lizard Lounge at the Individual World Poetry Slam, served as Cape Cod’s Spoken Word Poet Laureate from 2000-2005, and has won the Boston Poetry Slam’s Champion of Champions slam more times than anyone else since the inception of the series in 1993. He holds the venue title of Dirty Head-to-Head Haiku Champion, acquired on Erotic Poetry Night in 2012.

Adam joined the illustrious Boston Poetry Slam hosting staff in 2004. When not hosting, he was known to sit stage right and react to the poetry in such a way that the other hosts made a pact not to look at him or make eye contact during the open mic. Later on in the year, a waitress failed to show up, and famed bartender Judy Griffin referenced one of Adam’s poems about waiting tables, and told him to get to work. He has been on the bar’s payroll ever since. Judy’s retirement in 2009 was under the stipulation that Adam take over as bartender, so he has tried to remain true to her visions of overpouring, overlistening, shushing loud people, and occasionally saying something inappropriate regarding the people on stage. An invaluable part of the greater Boston poetry community, Adam served as Day Events Coordinator for the 2011 and 2013 National Poetry Slams in Boston and Cambridge.

Adam currently curates the venue’s weekly writing prompt series, Tips from the Bar, runs a most-weekly writers group called The Crooked Treehouse, and in 2012, he edited the 20 Years at the Cantab Lounge Anthology which celebrated… Well… The twentieth anniversary of the Boston Poetry Slam at the Cantab Lounge. He’s also been published in the 2013 Flicker & Spark Anthology of Queer Writers. In his increasingly spare time, he also works for a comic book store, Million Year Picnic, and has a graphic novel selection that worries many potential suitors. He may be reached via email for bookings.