Tips from the Bar: Like a New World, But New 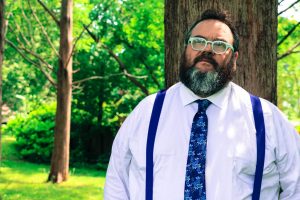 Zeke Russell is not your real uncle, but you can call him that. He grew up in Central Maine. In his thirties he found himself in Lowell, Mass., where he fell asleep at a coffee shop and woke up to a poetry slam happening right there in front of him. He fell in love with slam and started writing again. He first entered the Cantab in 2009 and never left the darkest corner of the bar.

Zeke is a member of the 2019 Boston Poetry Slam Team. He was previously a member of the 2016 and 2017 teams, and represented the venue at IWPS in 2017. His work can be found in Maps For Teeth, Drunk In A Midnight Choir, and Wyvern Lit. He lives in Somerville, Mass. and is clean and sober.