Tips from the Bar: The Way to Your Heart 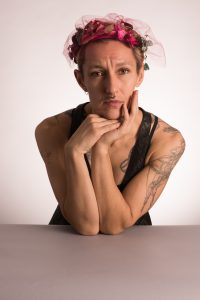 C. Bain is a gender-liminal writer, performer, teaching artist and theatre-maker. His poems are at once fiercely contemporary and mythological in scope. In his work, Bain turns to his own queer body to find and illuminate the cell of resistance within the self, the self-knowledge that makes transformation possible. He offers audiences this gift of Tiresian sight, prophesies from a second life.

C.’s book of poetry, Debridement, was a finalist for the 2016 Publishing Triangle Award for Trans and Gender-Variant Literature. His work has appeared in several anthologies and journals, including Muzzle Magazine, PANK, A Face to Meet the Faces, and the Everyman’s Library book Villanelles. He has thrice been nominated for the Pushcart Prize. He has an extensive background in poetry slam as a competitor and coach of several national-level teams. He has been selected for the showcases on Finals Stage at the National Poetry Slam multiple times. He has performed throughout the United States, and shared stages with diverse luminaries including Patricia Smith, Jim Carroll, Saul Williams, and Dorothy Allison.

As an out nonbinary trans person, C.’s more recent work has focused on the embodiment in performance, and the inseperability of body and text. He has studied acting and clown at the Barrow Group, and also has movement training in Butoh and martial arts. He is an Artistic Associate with the movement-based theatre company Sacred Circle. Most recently, C. collaborated with Sacred Circle to become Jokana’an in their production of Oscar Wilde’s Salomè at the Alchemical Theatre Laboratory in lower Manhattan. His delivery is known for its slow depth, searing emotion, and surgical clarity.