Tips from the Bar: Who Moved My Cheese?

Cantab Feature for Wednesday, April 19, 2017: JR Mahung and the Champion of Champions Slam with Kylie Noelle 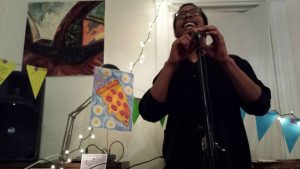 JR Mahung is a Belizean-American poet and educator from Chicago’s South Side. He is currently based in Boston where he helps organize the Louder Than a Bomb MA youth poetry slam and co-coaches Northeastern University’s slam team. JR is currently working on his second collection of poems on Pizza Pi Press, titled “Since When He Have Wings.” He has work published or forthcoming in Freezeray Literary Journal, Maps for Teeth, and Moko Literary Magazine. His mixtape is not for sale but he’ll ask you to buy it anyways.

Tonight also marks the final night in our current 8×8 poetry slam series! Following JR’s feature, eight slam winners will slam off for the season championship and the opportunity to challenge Kylie Noelle, the current reigning Champion of Champions, in a speed-slam-style event with 3, 2-, and 1-minute rounds.