For personal reasons, Deonte Osayande has had to cancel the New England leg of his tour. We wish him the very best and hope to welcome him back when he is ready to reschedule.

This show in our weekly Wednesday series takes place at the Cantab Lounge, 738 Massachusetts Ave. in Cambridge. Doors for the show open at 7:15. The open mic begins at 8:00 and the invitation slam will begin at approximately 10:00. The show is 18+ (ID required) and the cover charge is $3. 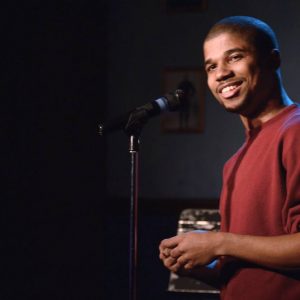 Deonte Osayande is a former track and field sprinter turned writer from Detroit, Mich. He writes nonfiction essays and his poems have been nominated for the Best of the Net Anthology, a Pushcart Prize and published in over 40 different publications. He has represented Detroit at multiple National Poetry Slam competitions and is currently the SlamMaster of Freshwater Wordsmiths. He’s a professor of English at Wayne County Community College, and teaches youth through the Inside Out Detroit Literary Arts Program. His first full collection of poems, entitled Class, will be available from Urban Farmhouse Press in 2017.