Tips from the Bar: Not About Adam 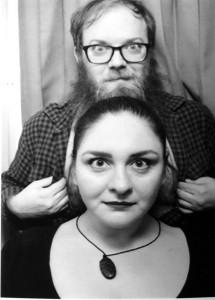 Emily Rose and Ben Clark are a powerhouse poetry duo touring in support of their latest releases from Thoughtcrime press. Starting in Chicago and hitting both the east and west costs in 2016, Emily and Ben’s collections are Mouthy and if you turn around I will turn around, respectively.

Emily Rose Kahn-Sheahan lives in Chicago where she has hosted and curated shows for ten years, including operating as the SlamMaster for Mental Graffiti and host/curator for Real Talk Live. She competed with 5 Chicago teams at the National Poetry Slam as a poet and coach as well as placing 14th at the 2011 Individual World Poetry Slam. Other
things she has done: Founding board member for Chicago Slam Works, former Chair of Poetry for the Bucktown Arts Festival, original cast of The Encyclopedia Show Chicago. Her work has recently appeared in Columbia Poetry Review, TriQuarterly, Muzzle Magazine, decomP, After Hours, and TimeOut Chicago. Her first chapbook, Cigarette Love Songs
and Nicotine Kisses, was published by Cross+Roads Press. Her new chapbook, Mouthy, was released on Thoughtcrime Press.

Ben Clark grew up in rural Nebraska and now lives in Chicago, where he writes and works as an editor for Muzzle Magazine. His first book, Reasons To Leave The Slaughter, was released by Write Bloody Publishing in 2011, for which he toured the Midwest extensively. He’s been widely published in both online and print journals including:
Pank Online, Sundog Lit, Birdfeast Journal, Leveler Poetry, Salt Hill Journal, Atticus Review, Everyday Genius, Radius Lit, Word Riot, and Decomp. He has also been included in several print anthologies including: Bestiary: the best of the inaugural demi-decade of A Cappella Zoo, and in Write Bloody Publishing’s classroom collection Learn Then Burn 2: This Time It’s Personal. He’s been featured online at Verse Daily, and in 2015 was nominated by Mount Island for a Best of the Net award. This summer he was selected for the second time to the Art Farm, a multi-disciplinary artist/writer residency in Nebraska, where he completed a chapbook entitled Dear Fox, Dear Barn with GennaRose Nethercott.