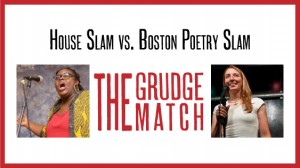 Get ready for the biggest National Poetry Month event of 2015! The House Slam @ the Haley House Bakery Cafe and the Boston Poetry Slam @ the Cantab Lounge are proud to present the first ever GRUDGE MATCH POETRY SLAM between the two venues.

On Sunday, April 19, greater Boston’s oldest and freshest slam venues will face off against each other in a head-to-head poetry battle for big-city bragging rights. Poets from each team will use all the tricks of their trade— lyricism, comedy, political fury, and straight-up heartfelt personal narrative— to impress rowdy audience and all-star judges in the heart of Harvard Square!

This show is 18+ and tickets are $10 in advance/$15 at the door. All proceeds go to help send the House Slam and Boston Poetry Slam teams to the 2015 National Poetry Slam in Oakland, California this August.