For those of you who were able to get tickets to our sold out Grudge Match show on Sunday: thank you, thank you, thank you! We packed the house with an awesome crowd (comic Wes Hazard said y’all were “dope,” btw) and were so proud to put on a show for you. All the proceeds from this show will be split between the Boston Poetry Slam and the House Slam to help send both teams to the National Poetry Slam this August. NorthBEAST!!

Oh, you’re wondering who WON this Grudge Match? Okay, okay: we officially acknowledge that by a 4-3 round score, the Haley House took the big win at our first ever show. Congratulations to the show, especially founding SlamMasters Porsha Olayiwola and Janae Johnson! Janae was captured in a great stage shot by official photographer Marshall Goff: 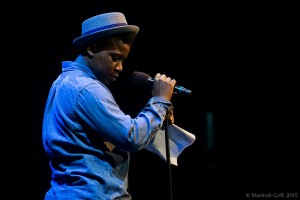 Janae Johnson takes the mic at the 2015 Grudge Match to tell us about the MBTA. Photo by Marshall Goff.

Congratulations to the Haley House! SEE YOU NEXT YEAR, RIVAL CROSS-TOWN SLAM!!11!1!

Of course, this show could not possibly have happened without the help of many hard-working volunteers. Remember hearing about the upcoming shows that all our judges, openers, and hosts are involved in?? Here’s a quick guide to what’s coming up from these excellent folks… We are proud to recommend all the shows featuring these talented folks:

Wow: what a baller troupe of staff folks. Want to give thanks for a great night? Please spread the word about these good folks making art happen all over the state.

Thanks, everybody. Looking forward to the rematch…