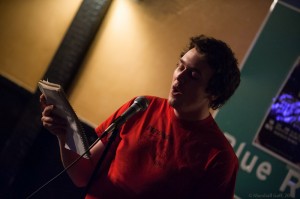 Ed Wilkinson performs in the team slam competition at the Cantab. Photo by Marshall Goff.

FEATURED POET: Ed Wilkinson hails from Manchester, New Hampshire, but has been a favored mainstay across the New England slam circuit for years. Declining to claim any kind of publishing or slam cred, Ed has nonetheless stealthily managed to achieve team finals for the Providence, Boston, and Manchester slam teams. Ed’s combination of wildly fresh perspective, unpredictably punk turns of phrase, and singular human empathy have won over audiences up and down the east coast. He claims to be “a better disgruntled employee than a writer,” which, in our book, makes him Disgruntled Employee of the Millennium.

WORKSHOP DESCRIPTION: Drawing on his experience as a workshop leader in Manchester, Ed Wilkinson will lead a generative writing workshop to begin the evening. 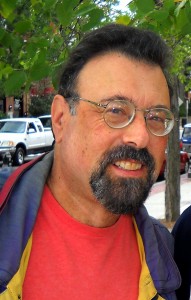 FEATURED STORYTELLER: For 28 years, Daniel Gewertz wrote about music and theater for the Boston Herald, among other publications. He currently teaches memoir writing at Cambridge Center for Adult Education. At Lesley University, Gewertz worked as an advisor in the MFA low-residency program in creative writing, 2009-2011. He’s just completed a novel, titled Ghost To Genius, and is midway through a book of memoir stories, A Virgin at Woodstock. In 2011, Gewertz won the first WBUR-FM Zip Code Story Contest, and first prize in the Somerville Story Slam. In 2010 he won second prize in the MassMouth All-Star Slam.

While a student at Boston University , Gewertz was best known for his Elvis Presley imitation. As a waiter at Café Pamplona, he once served Caroline Kennedy a cappuccino. Working as a security guard and maintenance man, he met John Lennon and Yoko Ono. As a 16 year-old, Gewertz was extended, but sadly turned down, an offer to join a small traveling circus.