Tips from the Bar: the Odd Couple

Oh, no big deal, folks: last week’s show just marked the first Wednesday of National Poetry Month, the time of year when we hold the biggest slam the Cantab’s got… Eighteen poets! Thirty-eight poems! Special guest hosts and viciously consistent judges! Damn, it was a fabulous show, and twelve poets were left standing at the end of the night. Here are the rankings after Team Selection Preliminaries: 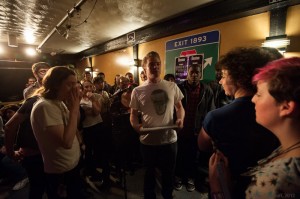 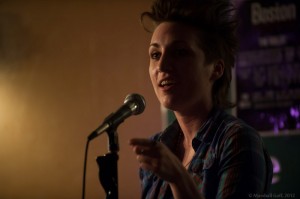 Carrie Rudzinski brings a new poem to sacrifice for the slam. Photo by Marshall Goff.

Poets in bold are qualified to advance to the Team Selection Semi-Finals on April 18; first round will be ordered low score to high score (ties resolved by reverse of second-round order). We’ve already heard a rumor that one poet will be dropping out to attend CUPSI, so watch this space for updates on the final roster!

Wait, what’s that you say? You had to stay home, write three papers, wash your cat and baby-sit your drunk uncle, so you missed the slam? You’ll be wanting some details about this great night, then…

The show kicked off with an abbreviated open mic hosted by April Ranger and long-lost 2011 team member, Carrie Rudzinski, who swung by on this leg of her tour to help us run the slam! A major highlight was bartender Adam Stone, who elected to drop out of the competition at the last minute, apparently so he could cover one of Carrie’s old poems in the open in an at-first hilarious, then surprisingly heartfelt way. The huge competition started up early (expect the same on April 18, too) with sacrifice poems from Carrie and 1998 Individual Finalist at the National Poetry Slam Brian Commiskey: when Brian turned up with a terrifyingly low score, we knew it was going to be a tough night on the hot side of the microphone. 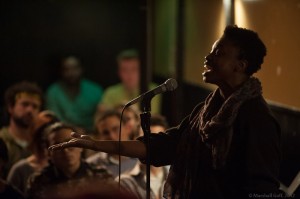 Kemi Alabi explains the concept of the American Slut. Photo by Marshall Goff.

The poet who draws the one-spot in the first round always comes out with guns blazing, and Kemi Alabi was no exception. Prayer for Occupy tore the room down and pulled a big score out of the judges that would stand as the high-water mark until the middle of the second round. Poets coming hot on her heels made every effort to catch her: of particular note was Ed Wilkinson, who wowed the room with Open Letter to My Heart and was rewarded by judges who didn’t seem to care that he was the only poet performing on page.

First-round strategy made for a wild ride for both audience and poets. Team slam vets Omoizele Okoawo and Simone Beaubien both elected to bring the tried-and-true to their early draws, surprising some old-timers in the audience with poems they hadn’t heard in years; 2011 teammates McKendy Fils-Aimé and Maya Phillips followed suit with poems ten years younger and were similarly rewarded. All four pulled first-round scores that, with consistent judging, turned out to be enough to cement their spots in the semi-finals.

New work for the 2012 season abounded in the early rounds, too: Kevin Spak risked a brand-new poem to combat his two-spot draw in the first round and got great crowd reaction, only to be shot down by a few of the judges. Just about everything that traveling poet Christian Drake brought was going to be new to this audience; his highly animated yet polished performance of For Tatiana was exciting enough to garner the second-highest raw score of the round.

But did it get weird? Of course it got weird, and it was awesome! Sadly, out-of-area-coder Patrick S. elicited a split response with his seasonal Krampus poem later in the show, and judges were similarly disenchanted with the quirky sweetness of Nate Leland’s lobster poem. Late in the round, crowd favorite Melissa Newman-Evans was the first to break the snark barrier with her treatise against those who write love poems; no stranger to snark himself, Sam Teitel countered with Jew-Burty, a poem whose spot-on comic timing and hairy elbows resulted in both big laughs and a big time penalty. Sneaking in between these two was the unstealthy Bobby Crawford, who brought the audience nothing they expected with a sing-along microphone-smashing Brian-Ellis-esque performance of Teenage Wasteland— good enough for second place in the round and the highest single score (9.8) from any of the judges all night. 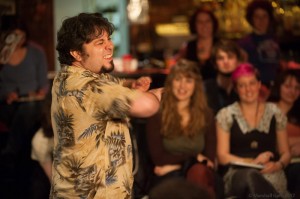 Sean Patrick Mulroy kept the slam moving at top speed into the second round, so poets with early draws were fortunate to be facing the same judges in a still-hot room. Remarkable consistency kept scores pretty low, with only a few more poets able to break the 27 barrier; one of these was Antonia Lassar, who reprised the chatty-yet-sincere tone of her own first-round poem with a more serious poem on the subject of assault that firmly placed her in the top qualifiers for semi-finals.

The biggest risk of the night came from Meaghan Ford, who brought a brand-new, intensely stylized and totally creepy persona poem to the middle of the second round, which split the judges and left her waiting to see how her competitors would fare; it turned out to be enough to snag the last spot in the semi-finals. Also looking to survive was Sophia Holtz, who flipped her tone from the sad and serious Death Speaks to the Dreamer in round one to the gently quirky Walden in round two, enough to place her in semis as well.

As the slam moved to the closing poems, big personality Brian Omni Dillon did his best to play catch-up, but just couldn’t put enough of his charisma into a poem about New York City to sell it to the Cambridge audience. The last poem of the night came from Matthew Richards; all but eliminated, he brought an especially moving and sweet performance of his half-erotica, half-praise poem to finish the night beautifully.

Special thanks to our audience, judges, and super-hard-working staff, without whom none of this fun would have been possible! Join us next week as we take a short break from slam: we’ll welcome Karrie Waarala with an early-bird workshop and Anis Mojgani as our feature.

The semi-finalists will all be back on April 18 to see who will survive to finals. In the meantime, you can enjoy a whole gallery of photos from the show, thanks to artist Marshall Goff. 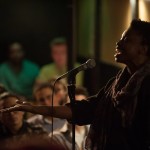 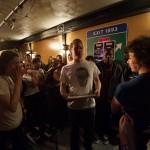 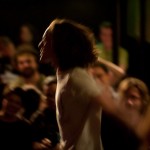 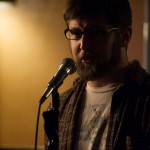 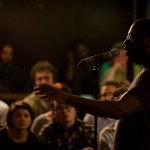 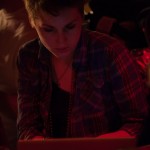 Carrie Rudzinski, hard at work on the score spreadsheet. Photo by Marshall Goff. 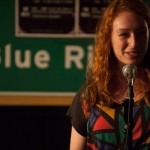 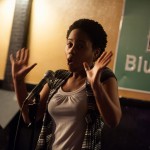 Maya Phillips takes no responsibility for the snarkiness of “The Valentine’s Day Poem.” Photo by Marshall Goff. 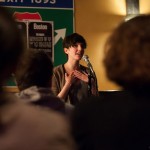 Sophia Holtz at a moment of intimacy. Photo by Marshall Goff. 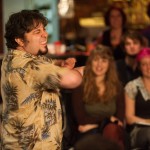 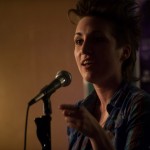 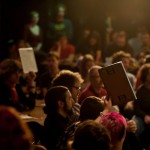 The packed house at the Team Slam Preliminaries. Photo by Marshall Goff. 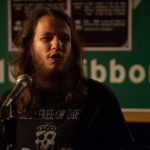 Matthew Richards praises all that is holy. Photo by Marshall Goff. 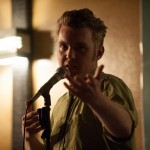 Christian Drake draws the audience in with his big performance style. Photo by Marshall Goff. 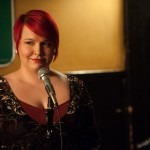 Melissa Newman-Evans has something to say to the lovers. Photo by Marshall Goff.