Welcome back to the Cantab, Boston students! It’s about that time of year again… When the returning students who know what’s up come and see us again for the first time, showing off all they’ve learned about home over the summer. Appropriately enough, our feature was Tatyana Brown, a Bay Area poet who lived with us for the summer months back in 2011! Tanya brought us a great selection of work about loves lost and strengths found, and, of course, she invited us to all come hang out at her own show in California. The slam was just one poet shy of filling up for late night, but that didn’t stop a number of experienced performers from throwing down… In fact, competing against their friends might have driven some of these folks to new heights! When the smoke cleared, it was Sophia Holtz at the top of the heap, with bartender Adam Stone just shy of the win.

Next week: we’re back on Wednesday with local writer and workshopper Michael F. Gill, and another open slam. And don’t forget: if you’re looking for another event to whet your poetry appetite during the week, you can some see the debut show of The Encyclopedia Show Somerville at the Davis Square Theatre on Monday, September 3! We’ll be doing an all-ages show that’s all about BEARS to kick off this new monthly series.

We think of animal migrations as north-south, whereas famed explorers are known for east-west travel. Choose your own cardinal direction of travel and write about what drives you there (or away). 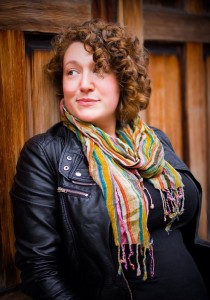 Let’s be honest: no one really subscribes to the philosophy that all good things must come to an end, do they? …Anyone who does surely wasn’t at Radio this past Monday, when Angel Nafis and Shira Erlichman gave our little Union Square show a fabulous send-off. From a dangerously inspirational workshop to a smart and all-new open mic to a remarkable confluence of double features in poetry and music, this past Monday’s show was everything we’d ever hoped New & Improved could be. Thanks so much to all our features and open mic poets who helped make this show great, as well as to Radio bar in Union, our favorite bartender/sound engineer/jack-of-all-trades Chachi, and erstwhile co-hosts Michael Monroe, Melissa Newman-Evans, and Jamei Bauer.

If you’re feeling sad, though, we’ve got just the tired old homily to cheer you up: from every ending comes a new beginning! That’s right, our weekly Monday open mic is transitioning to a monthly Monday variety show: The Encyclopedia Show Somerville! We’ve been planning this all summer, so we won’t let a little venue switcheroo get us down… Come join us at the Davis Square Theatre, 255 Elm St. in Somerville, on Monday, September 3 for our first installment of the Encyclopedia Show Somerville: BEARS!

The weather may be cooling off a bit, but the Cantab is definitely heating up for the end of the summer: Chicago-gone-Cornell editor Stevie Edwards drew a packed house last night, reading from her Write Bloody book Good Grief. She took us on a sweet, sad, and sometimes whiskey-soaked journey to come out with just a glimmer of hope on the other side. The slam was a rowdy one (Again! You people are animals! Literature-loving animals!), full up with new and veteran slammers who all seemed to have a different idea of what “three minutes” entails. Ultimately, the final round came down to Christian Drake and Zeke Russell, with Christian taking the night by just 0.1!

Good times, folks, and we’ll be back next week to do it all again. This time, our feature will be Jersey-to-Bay-Area performance poet Tatyana Brown. Our slam will be open once again, so you might want to rest up for another wild night. See you there!

Tips from the Bar: Actually

Title prompt: The Moon Dislikes You Comparing Her to Your Love. 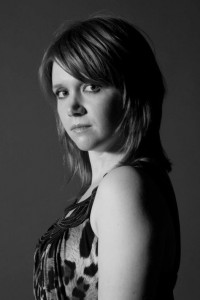 Stevie Edwards currently resides in Ithaca, New York, where she is working toward completing an MFA in creative writing at Cornell University. Her first full-length collection of poetry, Good Grief, was published by Write Bloody Publishing in April 2012. She is currently working on her second book, tentatively titled No Apocalypse. She is the editor-in-chief of MUZZLE Magazine, editor of 4th & Verse Books, assistant editor of EPOCH, and a proud alumna of Chicago’s Real Talk Avenue. Her work has appeared in Verse Daily, Rattle, Night Train, PANK, and a number of other publications.

Comedy! Poetry! Poetry! Comedy! We like to mix it up at New & Improved, so naturally we brought a poetry magazine editor and a nationally acclaimed comic together for last night’s show. Stevie Edwards and Joe Wong rocked it out (figuratively speaking) last night at Radio, following up on a great mix of comics and poets on the open mic, co-hosted by Wes Hazard! If you missed it, not to worry: Stevie will be back in full force at the Cantab show as the feature this Wednesday.

Oh, but if you have heard a sad rumor about New & Improved, folks, we’re afraid it’s true: our time at Radio is short and we’ll only be holding one more show there. BUT WAIT! We’ll holding an amaaaaaaaaaaaaazing farewell event at the venue this coming Monday for our last New & Improved pairing, featuring poet Angel Nafis and poet-musician Shira Erlichman. Each of these ladies could (and sometimes do) headline a national tour, but we get to have them both in one spot! 379 Somerville Ave. in Union Square, Somerville, is the place to be on Monday, August 27. Doors open at 6:30 for a 7:00 poetry workshop with Angel, an 8:00 open mic, and the 9:00 supah-stah double-feature. Sweet!

(Also, if you’re worried about what you’ll be doing with your Monday nights now that New & Improved can’t be there to entertain you… Here’s a sneak peek at the monthly Monday series we’ll be starting on September 3. It’s called The Encyclopedia Show: Somerville, and we can hardly wait.)

There was a line around the block last night for our little dive bar poetry show! Was it because people heard the open mic would be packed with great work? Or did they know that featured poet Ross Gay was going to be an exceptional feature? Or perhaps they heard that the slam would fill up fast with folks looking to qualify for the 2013 Boston Poetry Slam Team–

Whatever it was, no one left the house disappointed last night. First, our open mic featured first-time locals and travelers from as far away from New Zealand! Then Ross Gay was the perfect counterpoint to the boisterous open, settling us all down with some good, old-fashioned simple stories unsimply told: his way of smooth-talking a poem from one subject to another with such joy and color had us alternately standing up to applaud and sitting on our hands to keep from missing a single moment. He actually ran out of books, but if you still want to grab one, you can pick up Bringing the Shovel Down online.

After Ross’ feature, the slam made a fabulous finish to the whole night, with some slammers gunning for the win with big performance and others sneaking into the judge’s heart with quieter formal poetry… After surviving a tie in the first round, Dawn Gabriel made it to the final round, only to tie again with Mckendy Fils-Aimé in a spontaneous last-round pantoum-off! Mckendy eventually took the tiebreaker round, prompting a whoop of excitement from Dawn, whose loss frees her up to slam again next week.

Next week, by the way, we’ll have the Chicago editor-in-chief of MUZZLE Magazine in the house: Stevie Edwards will perform a full feature set. The night will close with another open poetry slam in the 8×8 series.

Tips from the Bar: Something Is Happening Here

Plenty of writers have tackled the story of the Fall from the Garden of Eden. Try it yourself, as a persona poem –but write it from the perspective of someone (or something) who was there and doesn’t understand what’s happening or why it’s important.