Tips from the Bar: the Harlym125 Prompt 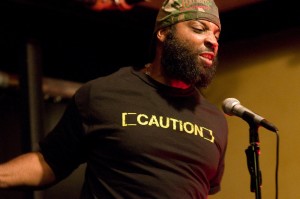 Harlym125 performs at the Cantab Lounge. Photo by Marshall Goff.

Jamele “Harlym125” Adams is, hands-down, one of the most powerful performance poets in the country. A onetime NPS finalist with the Boston Poetry Slam team back in 2008, he now is one of the leaders of the Lizard Lounge Poetry Jam, bringing a fiery rivalry and his shouts of “TEN! TEN! TEN!” to many a local bout. A mover for social justice, an enthusiastic educator and communicator, and a commanding writer to boot, he serves as Brandeis University’s Dean of Diversity and has been featured up and down the east coast. He founded the annual NUPIC slam at NPS and his last Cantab feature included a dance break. This show is not to be missed.