Tips from the Bar: Worst Nostalgia Ever 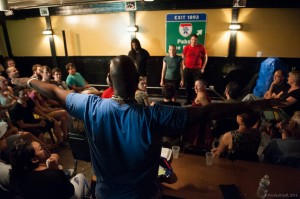 Harlym125 in the house? HELL, YEAH! At the NorthBEAST NUPIC last night, we took Harlym’s format to the concrete floor at the Cantab, pitting eight New England all-stars against one another in an epic battle. The eventual champ will go on to compete at the NUPIC (that’s National Underground Poetry Individual Competition) at the National Poetry Slam in just a few weeks! 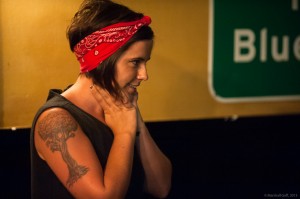 Huge love goes out to TLove from Portland RC, Rudy Cabrera from the Lizard Lounge, Ellyn Touchette from Portland PV, and Sarah Sapienza from Worcester Poets’ Asylum: these four best poets repped strong for their venues, but fell after a single poem each. Love their work? Live in their city? Check out the links on the right for more info on their NorthBEAST slams… Or find them at their scheduled bouts coming up in the preliminary round of NPS. 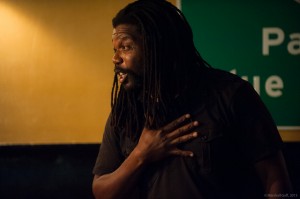 Hometown heroes Bobby Crawford (for Mill City) and Ed Wilkinson (the home rep) fell in the semi-final round, leaving a wicked pairing for the finals: Kayla Wheeler from Slam Free or Die took the stage against Christopher Johnson from Providence Poetry Slam. After THREE suspenseful recounts, Christopher Johnson took the title!– he’ll go on to the big super-secret show on August 16. Congrats to Christopher and to all our poets for rocking the mic!

Next week: JUST ONE MORE SHOW UNTIL THE NATIONAL POETRY SLAM, PEOPLE! Aaaaaaaaaaaand this one’s a doozy: your home team from the Boston Poetry Slam will present an extended feature.

That’s Ed Wilkinson, Omoizele Okoawo, Jade Sylvan, Nora Meiners, and Sean Patrick Mulroy in a full hour to show off what they are taking to NPS. Heads up: it’s a $5 cover this week to help raise the last of the funds to make this the best National Poetry Slam ever. Come celebrate our team!

If you missed the show, you can thank official photographer Marshall Goff for capturing some of the action for you last night. Here are a few gallery selects, fresh from the camera: 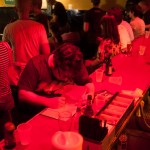 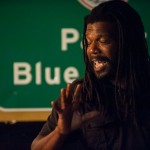 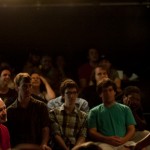 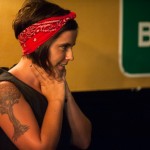 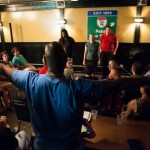 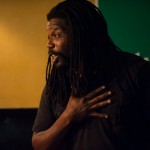