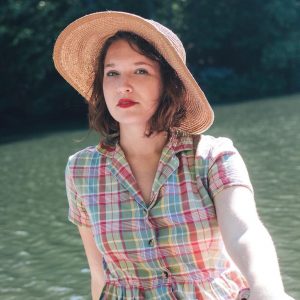 GennaRose Nethercott’s book The Lumberjack’s Dove (Ecco/HarperCollins) was selected by Louise Glück as a winner of the National Poetry Series for 2017. She is also the lyricist behind the narrative song collection Modern Ballads, and is a Mass Cultural Council Artist Fellow. Her work has appeared widely in journals and anthologies including BOMB, The Massachusetts Review, The Offing, and PANK, and she has been a writer-in-residence at the Shakespeare & Company bookstore, Art Farm Nebraska, and The Vermont Studio Center, among others. A born Vermonter, she tours nationally and internationally composing poems-to-order for strangers on a 1952 Hermes Rocket typewriter.

Tonight’s show also offers an early-bird workshop before doors open for the open mic! Click here for more information on GennaRose Nethercott’s Monster Lab, a generative workshop drawing on folklore to write on the subject of monsters.