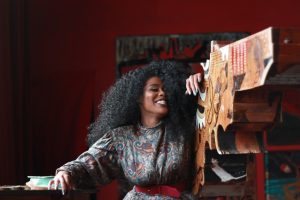 Siaara Freeman is from Cleveland Ohio, where she is the current Lake Erie Siren. She is an avid reader & adores myths & fairytales. Once upon a time she was 16 and competed in a competition called Brave New Voices & from that day forward poetry was her happily ever after. She has toured both nationally and internationally (including Canada, Costa Rica and Norway). A two time nominee for the Pushcart Prize, a finalist for the 2017 Button Poetry chapbook competition, a 2017 Bettering America poet and Best Of The Net Poet, a 2018 Winter Tangerine chapbook fellow and a 2018 Poetry Foundation incubator fellow, Siaara is also a four year Pink Door Fellow & 2018 Pink Door faculty member. She has coached numerous teen and adult poets. She is the founder of Wusgood.Black and a reader for Tinderbox & Winter Tangerine journals. In her spare time she is growing her afro so tall God mistakes it for a microphone and tries to speak through her. Her first collection of poems, Raised By The Dead, is forthcoming in 2019 from Honeysuckle Press.

Tonight’s show will also offer a late-night poetry slam, the Last Chance to get back into the team selection series! With Team Selection Preliminaries in the rearview (whoa) and Semi-Finals on the horizon (sweet!), the Cantab offers one more chance to get back in the game. Poets who sit out the open mic and put their name in the hat by 9:00 p.m. will have a chance for one of eight spots in the 10:00 slam. The slam will be two rounds (order is randomized by draw for both), and poets will have a TOTAL of 4 minutes over two rounds to impress the judges, with the top cumulative scorer earning a spot in Semis. Any poet looking for a Semi-Final spot is welcome to throw their name in the hat, including those knocked out prelims last week, but let the preliminated be warned: no poems that were already slammed in this year’s preliminaries will be permitted. If slam rules get you hype, you can check out the full format here. Judges are invited to offer their services in advance in return for free admission; please email slamseries@bostonpoetryslam.com.

This show in our weekly Wednesday series takes place at the Cantab Lounge, 738 Massachusetts Ave. in Cambridge. Doors for the show open at 7:15. The open mic begins at 8:00 and the the feature will follow at approximately 10:00, with the slam beginning around 11:00. The show is 18+ (ID required) and the cover charge is $3.