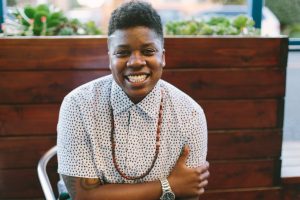 Janae Johnson, 2015 champion of everything, still crowned on both coasts. Photo by Lorenz Angelo.

Her poetry has appeared in outlets such as ESPN, Button Poetry, and PBS Newshour. Janae currently resides in Berkeley, Calif. and she works as the Associate Director of Programs at Youth Speaks. Holla at Janae if you wish to discuss Stevie Wonder, MasterChef episodes, or Black musicals.