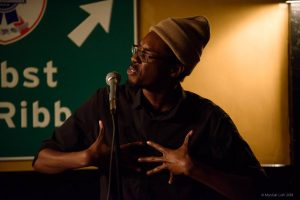 Evan Jymaal Cutts is a 23-year-old Boston native, poet, journalist, and writing workshop facilitator. Evan was a member of the Emerson College 2017 CUPSI Team and 2017 National Poetry Slam “Last Chance Slam” Team. He puts his faith in Black joy, his mother and father, and the power of imagination. His poetry navigates expressions of Blackness, Boston, narrative, and magic. His poetry is published in Broken Head Press, Apogee Journal, Voicemail Poems, Maps for Teeth, and The Merrimack Review.

Note: due to circumstances beyond the spotlight’s control, Bill Moran’s spotlight feature has been canceled this evening. We hope to reschedule Bill on his next New England go-around.

This show in our weekly Wednesday series takes place at the Cantab Lounge, 738 Massachusetts Ave. in Cambridge. Doors for the show open at 7:15. The open mic begins at 8:00 and the feature performs at approximately 10:00. The Last Chance speed slam will follow. The show is 18+ (ID required) and the cover charge is $3.