Tips from the Bar: 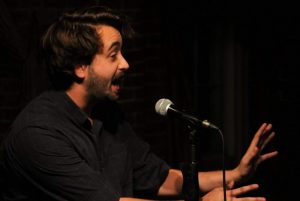 John Pinkham is a poet from Boston. Apart from creating undrinkable bespoke cocktails at the Cantab Lounge, John was a member of Slam Free or Die’s 2017 National Poetry Slam team. John has published poems, but prefers forgetting about deadlines. Drawing inspiration from his family’s Boston Italian roots, his poems can be paired with a large iced regular from Dunkin’ Donuts and a pizzelle cookie.