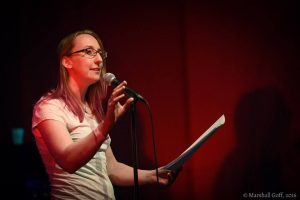 Simone Beaubien performing at the 2016 Grudge Match at ONCE Ballroom. Photo by Marshall Goff.

Simone Beaubien is the SlamMaster of the Boston Poetry Slam at the Cantab Lounge, a franchise player since 2001, and the kind of jerk who books herself for a feature just about once every six years or so. She has been published exactly nowhere and has no books to sell you, so save your money and buy bourbon for someone you love (hint: could be yourself) instead.