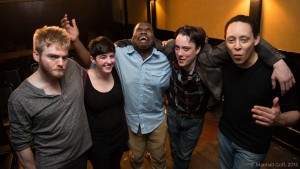 The 2015 Boston Poetry Slam Team. Sean is making the same face he made last year. Photo by Marshall Goff.

This night will mark the Cantab’s last show before the 2015 National Poetry Slam, when we send off the 2015 Boston Poetry Slam team to compete for a week in Oakland, California! Mckendy Fils-Aimé, Marshall Gillson, Bobby Crawford, Sophia Holtz, and Sean Patrick Mulroy will present an extended feature full of all the hits, future favorites, un-slammable group pieces, and rare-for-a-reason B-sides before hopping a plane to the other side of the country.

To learn more about the 2015 Boston Poetry Slam Team, click here. We’ll also keep you updated here with the team’s upcoming bout schedule at the National Poetry Slam, and links to help you follow along: the bout draw was announced in early July and you can see the team’s Wednesday and Thursday NPS bout schedule here.

This show in our weekly Wednesday series takes place at the Cantab Lounge, 738 Massachusetts Ave. in Cambridge. Doors for the show open at 7:15. A slightly shortened open mic begins at 8:00 and the extended feature begins at approximately 10:00. (No open poetry slam tonight.) The show is 18+ (ID required) and the cover charge is $5.