Tips from the Bar: The Nermal Arbuckle Prompt 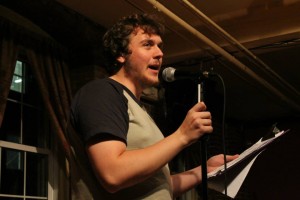 Ed Wilkinson has been writing and performing poems all over New England for years. He was a member of the 2013 Boston Poetry Slam team and is a current member of the Slam Free or Die loser’s club. He is currently working on several poetry projects that are unlikely to be completed in the near future because he has too many hobbies. These hobbies include but are not limited to: fire spinning, sadness, tabletop miniatures games, barely playing the harmonica and being easily distracted. Ed lives in Manchester New Hampshire and works at a gas station. He considers himself a better disgruntled employee than a writer.

Tonight’s show will also feature an open mic spotlight from April Ranger, beloved Cantab host and three-time Boston Poetry Slam Team member, returning for a visit from NYC. In town for just this one night, April will perform a short set during the open mic portion of the evening.