Tips from the Bar: Flying in Your Underwear Over a Graveyard with Your Stepmom 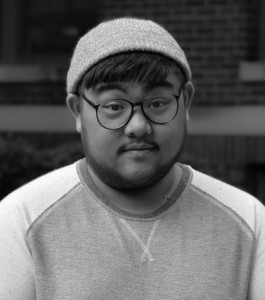 Hieu Minh Nguyen was born and raised in Saint Paul, Minnesota, by a single, Vietnamese-American mother. He is the author of This Way to the Sugar (Write Bloody Press, 2014) He co-coached the 2011 University of Minnesota poetry slam team, which placed fourth at the College Unions Poetry Slam Invitational.

Hieu was also a member of the fifth-ranked Minneapolis adult National Poetry Slam team in 2011. In 2012, he was a featured performer at The Equilibrium’s 10-year anniversary show, performing alongside slam legends Patricia Smith and Anis Mojgani. He is currently a member of the Good News Poetry Tour, which travels across the country performing at various colleges and universities. His work has appeared or is forthcoming in publications such as The Journal, PANK, Muzzle, decomP, Anti-, and Indiana Review. He works at a haberdashery.

Tonight also marks the final night in our current 8×8 poetry slam series! Eight slam winners will slam off for the season championship and the opportunity to challenge reigning Champion of Champions Sean Patrick Mulroy.