Tips from the Bar: Why Adam Doesn’t Drive the Company Car 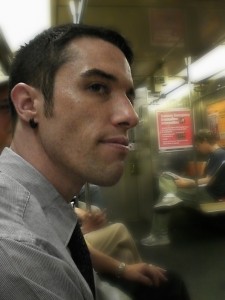 Geoff Kagan Trenchard’s poems have been published in numerous journals including Word Riot, The Nervous Breakdown, The Worcester Review, SOFTBLOW and Pemmican. He has received endowments from the National Performance Network, Dance Theater Workshop, The Zellerbach Family Foundation and the City of Oakland to produce original theatrical work. As a mentor for Urban Word NYC, he taught weekly poetry workshops in the foster care center at Bellevue as well as in Rikers Island with Columbia University’s “Youth Voices on Lockdown” program. He is a recipient of a fellowship from the Riggio Writing and Democracy program at the New School and the first ever louderARTS Writing Fellowship.

Geoff has performed poetry on HBO’s Def Poetry Jam, at universities throughout the United States, and in theaters internationally as a member of the performance poetry troupe The Suicide Kings. His first poetry collection, Murder Stay Murder, is published on Penmanship Books. He is currently a Juris Doctor Candidate for the class of 2014 at the Hofstra University School of Law. He lives in Brooklyn and can be found at his personal website.