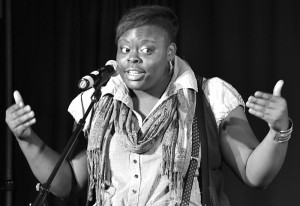 Black, dyke, poet, lover hip-hop feminist, womanist friend, Porsha Olayiwola is a performance artist who believes in pixie dust and second chances. A resident of Boston by way of Chicago, Porsha O. was runner-up at the 2012 Women of the World Poetry Slam and a finalist at the 2013 tournament, as well as a driving member of multiple semi-finalist Lizard Lounge National Poetry Slam teams and a MassLEAP spoken-word teaching artist. Her intention is to speak, love, and maintain a cypher that is undocumented, uncontrollable and just plain ole dope.

Porsha earned a BA in African American studies from the University of Illinois. A native of Chicago, she moved to Boston in 2010 to serve as an AmeriCorps*VISTA for the National Coalition for the Homeless. During her year of service, she started the Massachusetts’ Faces of Homelessness Speakers Bureau. She is also a member of Boston’s HBGC Women’s Council, helping to address issues surrounding queer women of color in the Boston area. Porsha is super excited to be working with young people as Codman Academy’s Enrichment Coordinator and Slam Poetry Coach.

Poetically, Porsha intertwines the spirits of Audre Lorde, Fannie Lou Hamer, Ida. B. Wells Barnett and June Jordan with the bluntness of Hip Hop Feminism, creating poetry that speaks for itself. She has opened for Mae Jemison, the first African American female astronaut, MC LYTE, pioneering female hip-hop artist, Dr. Cornell West and Dr. Angela Davis. A founding member of the Chicago – based political performance group, “The Unwritten Amendment,” she uses poetry to create a dynamic flow of infra-politics that rebels against the norms and rigidity of society.