Tips from the Bar: No One Is Saying That Adam and Simone Are Now the Same Person 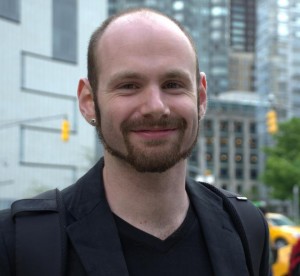 The first time David Winter performed his poetry was at the Cantab Lounge in 2004. In 2013, his chapbook Safe House was published by Thrush Press. His writing has also appeared or is forthcoming in Four Way Review, Atlanta Review, and For Some Time Now: Performance Poets of New York City. He is an MFA student in Creative Writing at The Ohio State University and an Associate Poetry Editor for The Journal.

David’s feature will be followed by the SESTINA SLAM, an open poetry slam in the 8×8 series requiring at least two sestinas from each participant. All standard poetry slam rules will apply and the slam will run in the standard 8×8 format linked here. In addition, each participant must have at least TWO SESTINAS and one additional form poem: round one of the slam will require a sestina, round two may be a form poem of any type, and round three requires another sestina. You may peruse the writing rules for a sestina on Wikipedia.

Due to the specific nature of the slam, advance signups will be taken by email. There is ONE SACRIFICE SPOT remaining, but the slam is now full! Confirmed participants: Nathan Comstock, Gemma Cooper-Novak, Sean Patrick Mulroy, Mckendy Fils-Aimé, Jade Sylvan, Jonah Comstock, Patrick S, Christopher Clauss, with Chloé Cunha as sacrifice.

This show in our weekly Wednesday series takes place at the Cantab Lounge, 738 Massachusetts Ave. in Cambridge. Doors for the show open at 7:15. The open mic begins at 8:00 and the feature performs at approximately 10:00. The Sestina Slam, which will also serve as an open slam in the 8×8 series, will follow. The show is 18+ (ID required) and the cover charge is $3.