The 2016 Boston Poetry Slam Team was selected through a seven-poem slam series completing on March 16, 2016, and was comprised of two venue veterans, two newcomers to the venue team, and one out-of-retirement SlamMaster. 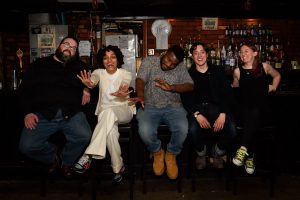 The top scorer (by a wide margin!) in team competition, Neiel Israel is an internationally acclaimed poet, vocalist, and arts educator who reports that her first time performing a poem on stage came at the Cantab Lounge. Emerging from UMass Boston with a B.A. in English, Neiel quickly distinguished herself as a powerful and lyrical poetic voice in the Boston slam scene. As an international teaching artist, Neiel leads workshops and classes in creative writing for schools, community programs, and colleges, and she is presently the America SCORES Boston Poet in Residence. She was a five-time member of the Lizard Lounge National Poetry Slam Team (2011-2015) as well as the Lizard Lounge Representative for (2011) Women of the World Poetry Slam. This year marks her first on the Boston Poetry Slam Team.

Mckendy Fils-Aimé hails from Manchester, New Hampshire, where he is an instrumental organizer and co-host for his home slam, the long-running and wildly popular Slam Free or Die. An eight-time veteran of the National Poetry Slam and perennial semi-finalist, as well as the winner of the Boston Poetry Slam’s 2012 World Qualifier, he has been published in Freezeray, Word Riot, and Drunk in a Midnight Choir. The only thing Mckendy likes as much as poetry is his sneaker collection. His first full-length book is forthcoming in late 2017.

Simone Beaubien is the SlamMaster of the Boston Poetry Slam at the Cantab Lounge. After directing the 2011 and 2013 National Poetry Slams in Boston, she crawled into a literary hole and only emerged on Wednesdays to host and curate the home venue’s weekly reading. She has hosted, performed, and competed from coast to coast, convinced NPR that poetry is not dead, and enjoyed her own work as performed by John Malkovich. This will be her ninth time on the Boston Poetry Slam Team.

Zeke Russell Zeke Russell grew up in central Maine surrounded by artists and lumberjacks. Since then, he’s been a cook, a teacher, a security guard and a social worker. He lost poetry after college, but found it again in the Lowell, Mass. art scene. He served as SlamMaster for the Mill City Slam from 2011-2014, was Grand Slam Champion of the 2011 Mill City slam team, and coached their 2013 National Slam team. His work has appeared in Wyvern Lit, Drunk In A Midnight Choir, Maps For Teeth and Printer’s Devil Review. He lives in South Boston with his partner Emily and the world’s most poorly behaved pug dog. This is Zeke’s first year on the Boston Poetry Slam Team.

Bobby Crawford is the Boston Poetry Slam’s former Champion of Champions, 2013 World Qualifier winner, occasional fill-in bartender, and Cantab reserve supply sex symbol. He is a seven-time National Poetry Slam team member and currently coaches the Emerson College CUPSI slam team. His work has been featured around the United States, and his first full-length collection, Only Show In Town, was published in 2014 by Wilde Press.

Performance and strategy coaching for the 2016 Boston Poetry Slam Team was coordinated by Simone Beaubien.