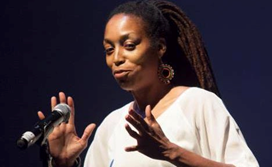 Neiel Israel is an internationally acclaimed poet, vocalist, and arts educator. Emerging from the Boston spoken-word scene, she quickly distinguished herself as a powerful, and lyrical poetic force. On a roll for 2016, she will represent the Boston Poetry Slam at both the National Poetry Slam and the Individual World Poetry Slam. She has previously represented the Lizard Lounge at Nationals (2011-2015) and the Women of the World Poetry Slam (2011).

Neiel has a B.A. in English, and graduated with honors, from the University of Massachusetts Boston. As an international teaching artist, Neiel leads workshops and classes in creative writing for schools, community programs, and colleges. She is presently the America SCORES Boston Poet in Residence, serving eleven elementary schools and four hundred eleven students.