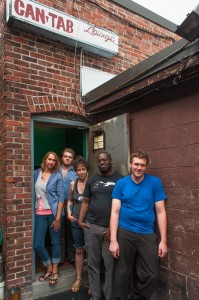 The 2013 Boston Poetry Slam Team was selected over a three-night, seven-poem series completing on March 13, 2013. The top five scorers in the final night of competition comprise the home team for the National Poetry Slam, to be held here in the Boston area from August 13-17. The three NPS rookies and two five-plus-year veterans are available for individual or group bookings by contacting slammaster@bostonpoetryslam.com.

The top scorer in overall team competition, taking first place at Preliminary qualifiers and again at Finals, is slam team first-timer Ed Wilkinson. Ed Wilkinson hails from Manchester, New Hampshire, but has been a favored mainstay across the New England slam circuit for years. Declining to claim any kind of publishing or slam cred, Ed has nonetheless stealthily managed to achieve team finals for the Providence, Boston, and Manchester slam teams. Ed’s combination of wildly fresh perspective, unpredictably punk turns of phrase, and singular human empathy have won over audiences up and down the east coast. He claims to be “a better disgruntled employee than a writer.” 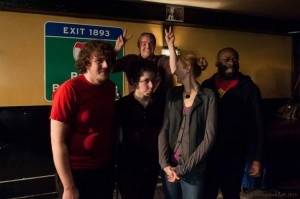 The 2013 Boston Poetry Slam Team in a post-Finals candid by Marshall Goff.

Jade Sylvan comes from a family of vaudeville performers, scientists, professors, and drunks. She’s an award-winning poet, songwriter, and nonfiction writer whose poetry and essays have been published in over twenty journals. Jade won the 2011 Bayou Poetry Prize, and was a finalist in the 2012 Bunchgrass Poetry Prize and the 2012 Write Bloody Book Competition. She embodies Fact Checker Jack Van Sly in the Encyclopedia Show: Somerville and her book Kissing Oscar Wilde will be released on Write Bloody in October of 2013. This is her first slam team.

In 1997, Nora Meiners graduated from Emerson College with a BFA in Creative Writing. Like so many who fall in love young, Nora and writing found that they were not meant to spend “forever” together. After one memorable shouting match, as Nora puts it; writing quit her. They have recently mended ways, just in time for her to achieve her first slam team. Nora lives in Cambridge, Mass., where she is raising a 4-year-old son as a single mom and spends her days working as the “missing pieces person for a jigsaw puzzle company.” Yes, that is the real job title.

Born and raised in Southern Virginia, the house where Sean Patrick Mulroy grew up was built in 1801 and was commandeered by the union army during the civil war to serve as a makeshift hospital. As a boy, Sean loved to peel back the carpets to show where the blood from hasty surgeries on wounded soldiers had stained the wooden floorboards. Now he writes poems. Sean has slammed for teams from Hampshire College to NYC to Omaha, but returns to his home slam this year for the first time since 2009.

The 2013 Boston Poetry Slam Team is coached by April Ranger and Simone Beaubien.