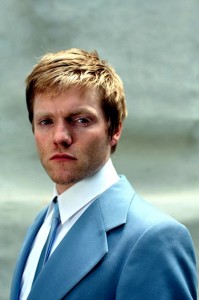 Musician and songwriter Sean Patrick Mulroy found himself on the breaks and without a band mid-tour in 2004. After about a year and a half of playing Nintendo in his basement, he re-emerged briefly, only to find himself drawn to the basement of the Cantab Lounge for the weekly slam. An intense listener and quick study, he burst onto the Cantab slam scene not long thereafter with his rockstar’s sense of showmanship and acerbic, Southern sense of humor.

After capturing the Cantab’s informal Rookie of the Year award in 2005, Sean subsequently went on to found the first PSi-certified slam based on a college campus, the Hampshire College Slam Collective (HCSC), fostering the western Massachusetts college’s continuing close relationship with the Boston Poetry Slam. He is the only poet to be invited to showcase on two national Finals stages in the same calendar year (CUPSI 2008 and NPS 2008). 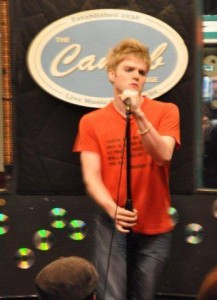 Sean’s one-man multimedia rock show about the effects of media upon sex and love in modernity, The Pornography Diaries, began as his final undergrad project for Hampshire in 2009. After graduation, he toured nationwide with the show (and its eponymous chapbook and CD), returning home in time to compete at the National Poetry Slam with the 2009 Boston Poetry Slam Team. He departed Boston to pursue his craft in NYC after NPS 2009, embarked on a wildly successful international tour in 2012, and returned to launch the venue’s now-retired queer open mic and reading series, Moonlighting. Sean went on to be a member of the 2013, 2014, and 2015 Boston Poetry Slam Teams as well as the Individual World Poetry Slam representative for the venue in both 2014 and 2015.

Sean is currently a candidate for his M.F.A. in poetry at the University of Wisconsin in Madison. He may be reached at thevanishingman.com.