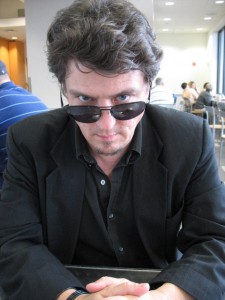 Ryk McIntyre ruling the roost at Got Poetry. Photo by Melissa Guillet.

Ryk McIntyre can be counted among the Cantab originals; in 1991, he represented the venue at the National Poetry Slam (note that poets born in 1991 are now old enough to enter the Cantab). A mainstay of the scene, he became part of the new-school hosting staff in 2004 when the SlamMaster post changed hands. After a fourteen-year absence from the National Poetry Slam, Ryk earned a spot on the venue’s slam team in 2005, setting the record for Cantab slammer with the longest hiatus and return. Additionally, he slammed in national competition for Worcester for two years and was also featured at the very first Legends of Slam showcase at the 2006 National Poetry Slam.

Ryk has toured nationally and in Canada, opening for acts as varied as Leon Redbone, Andrei Codrescu and Jim Carroll. He has performed his work at NYC’s New School and Boston’s ICA and Strand Theater, as well as appearing as part of Lollapalooza. He has been published in Short Fuse- An Anthology Of New Fusion Poets, 100 Poets Against The New World Order, Aim for The Head (Write Bloody Press), nthposition, The Worcester Review, and The Huffington Post.

He was selected to MC preliminary bouts for the 2005 Individual Poetry Slam in Worcester and the 2011 National Poetry Slam in Cambridge in Boston. He lives in Providence, R.I. and may be reached for bookings via email.