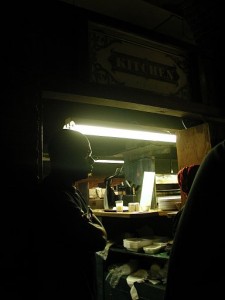 Oz waits to perform at the 2001 National Poetry Slam in Seattle. Photo by Simone Beaubien.

Omoizele Okoawo (“Oz”) has been a force in poetry slam for nearly a decade, both as remarkable performer and talented coach. He blames the movie Love Jones for sending him (and his sister Iyeoka Okoawo) to the Lizard Lounge to read poetry in public for the first time in 1997. He started slamming at the Cantab in 1999 and made his first team in 2000. He coached the Lizard Lounge National Poetry Slam team from the slam’s inaugural year in 2001 until 2007, competing as a team member for five of those seven years. He qualified for the last-ever NPS Individual Finals in 2007 and finished ninth. 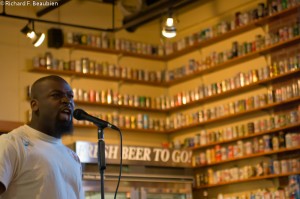 Oz returned to the Boston Poetry Slam team in 2008 for the team’s first NPS Finals stage appearance since 1994, “kicking in the door” for the Finals bout with one of the tournament’s most memorable poems. He also competed for the team in 2009 and 2010, getting drunk off his ass and eating strawberries, then achieving semi-finals, respectively. He was shot and killed multiple times soon after (Ed.: was defeated by 0.1 at the conclusion of the highly competitive 2011 Cantab team selection slams) and was seen lugging sound equipment around NPS 2011 as a zombie slave. He was revived in time to compete for the 2012, 2013, and 2014 Boston Poetry Slam teams.

A respected and invaluable member of the national slam community, Oz moves chairs and/or is moved to host weekly at the venue. He drinks bourbon and Magner’s, but not because he likes the taste of bourbon.