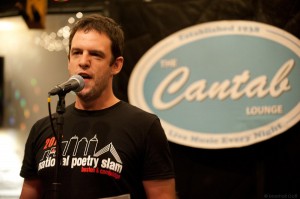 Michael accidentally discovered The Boston Poetry Slam when dragged to the Cantab Lounge for “some sort of poetry reading” by his OkCupid date in 2008. Something about “semi finals” to pick a team for the “National Poetry Slam” (or whatever), and boy did he think it would waste the reluctant electricity needed to amplify what would surely be the World’s Worst Poetry Ever.

After one hit of high-caliber spoken word performance, he immediately decided his pursuits as a proficient fire-spinner, jazz pianist and axe juggler were clearly boring, and he’s worked to refine his writing and performance skills ever since– tragically, the online dating experiment didn’t last the month. In just a few short years in the poetry community he wins slams hither and thither (got to the team Semi-Finals at Cantab in 2010, the World Qualifier Finals in 2011, and landed a spot on the Mill City Slam team for 2012), has produced two chapbooks and a CD, regularly tours throughout New England, trounced the inaugural 365 Challenge Blog by writing as many poems in a year (the dark horse victor who didn’t start until March-– then facilitated the blog thereafter), and was tapped as the Development Director for the wildly successful 2011, and 2013 National Poetry Slams.

These days, Michael works full-time at a 100% worker-owned solar panel company, as well as leading workshops on writing, performance, and the intersection of the arts with LGBTQ activism in particular. He was an originating host of the Boston Poetry Slam’s, Moonlighting show, and believes, with the earnest zeal of a man convinced, by faith and empiricism, that you might like poetry, too.