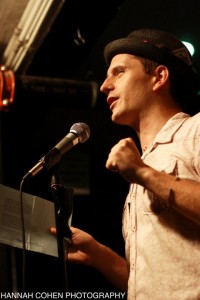 Erich Haygun likes to say that The Cantab Lounge has both figuratively and literally saved his life. Sometime after the turn of the century, he crossed the bridge from his native Boston into Cambridge and buried his heart forever in Central Square. Though he no longer performs exclusively in a hooded sweatshirt, Haygun remains an intense, lyrical anomaly within the community, yet also a definite product of The Cantab as a writer and performer. Colleague April Ranger has called him “the moral voice of The Cantab open mic,” and when working at the door Erich is fond of inviting each first-timer to come back every Wednesday for the rest of their life. 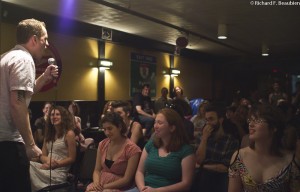 The Cantab Lounge gets all of Haygun's jokes. Photo by Rich Beaubien.

Haygun is currently at large in several cities and tours regularly as both a professional performer with his band/political platform The Debate, as well as a freelance live sound tech for the losing-est team in basketball history, The Washington Generals. He has released several albums on Boston-based The Whitehaus Family Record, and is offering writing/performance workshops based on from his experience as a volunteer facilitator for The Boston Area Rape Crisis Center. Questions? Contact him by email.