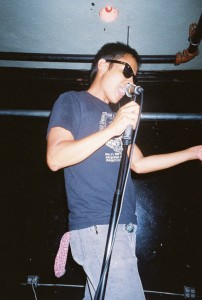 Carlos Williams gets a little r-e-s-p-e-c-t between the open mic and slam.

Carlos Williams has been a valuable asset to the Cantab franchise since his acquisition in the fall of 2006. A veritable midfielder, much of his value to the venue lies in his ability to cover most positions— server, doorman, set-up, or host. Without a doubt, he shines most often as the Wacky Bar-Backy, a spot on the floor whose actual status as “being a real thing” has been hotly contested. Regardless, he continues to stack boxes, pour shots, and fetch things, all the while remaining a positive locker room presence, evidenced by his apt and adept one-liners. 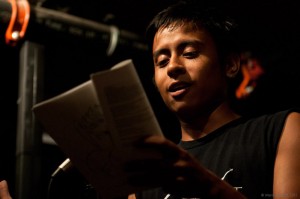 A college league standout, Carlos was a founding member of the Emerson College slam team (“The Gringo Choir“) that achieved CUPSI semi-finals in 2008. In 2009, the Emerson team competed at CUPSI Finals and Carlos was selected as Best Male Poet of the tournament. He was called up to the Cantab in early 2009 and competed for the venue as part of that year’s slam team (“The Dude Train”). Carlos lays claim to being the mind behind the venue briefly adopting the Speedo as team uniform.

Recently, time penalties and league fines have hampered his reputation, but with adjustments to his game thanks to specialist training and a new nutritionist, the organization hopes to see a quick turnaround. His free agency opens in the first half of 2012 and various trade rumors have placed him in South Korea, Ogdenville, and obscurity. He can be reached by email.