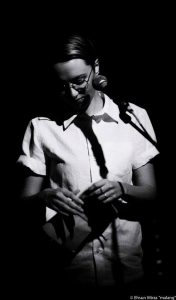 Muggs Fogarty is a queer writer, performer, and vocalist local to Providence, Rhode Island. Muggs has represented Providence in national poetry slam competition eight times respectively and is a 2017 FEMS Slam champion, a National Poetry Slam semi-finalist, and a Brave New Voices finalist. Muggs has been a co-director of award-winning Providence Poetry Slam and ProvSlam Youth since 2014, and has coached several youth and collegiate level slam teams, particularly through UCONN, Brown University, and RISD. Muggs has also worked as an arts mentor with local organizations such as New Urban Arts, CityArts, and PASA, and has received awards from the Rhode Island State Council on The Arts. Muggs is the author of Unburn (Ghost Hum Arts 2016) and the forthcoming Sex Camel (Game Over Books 2018), and can also be found fronting the local darkpop band, Lookers, as well as their own solo loop pedal project, Sweetpea Pumpkin. Muggs is a resident at the non-profit community arts space, AS220, and also practices bodywork as an LMT in Providence.

Muggs will also present an early-bird workshop before their Cantab show. All are welcome and advance sign-ups are recommended, but not required; please see the separate event page for more information.