Tips from the Bar: Secret Squirrel 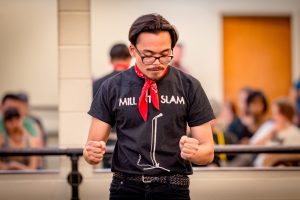 Ricky Orng is a Cambodian-American organizer, designer and storyteller, who enjoys photography, spoken word, and teaching. He has worked extensively with youth organizations on contemporary arts and social justice projects. He regularly eats ramen at the community space EMW Bookstore, and is Director, a.k.a. ‘Uncle,” at Lowell’s Youth Spoken Word organization, FreeVerse!. He currently organizes the bi-monthly Untitled Open Mic in Lowell, Mass. and one of the longest running Asian American Pacific Islander open mics in the country, East Meets Words. All of Ricky’s poetry is about love and relationships and his relationships with his loves. Growing up as a second generation Cambodian-American to war-fleeing parents is an important element to his identity. His parents used to own a donut shop and he believes that deep frying is a part of his family’s survival.

Ricky Orng is also currently touring and performing as part of a duo artist project, Adobo-Fish-Sauce, a multi-sensory cooking-poetry show. You can visit him on Instagram or read his work online.