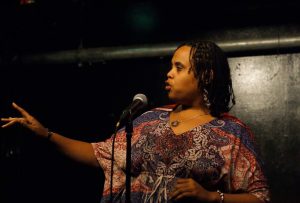 Vernell Bristow is a poet from Columbus, OH. She began writing poetry while in college at Denison University. Her first poem was given to her by the universe. Since then, she’s had to work for every poem she’s written. Vernell has many experiences in the world of poetry slam, representing her scene multiple times at all three Poetry Slam Inc., events (the National Poetry Slam, the Individual World Poetry Slam, and the Women of the World Poetry Slam).

When Vernell not working on her own poetry, she’s had the pleasure of editing the published works of other poets. Her latest artistic endeavors have led her to the theatrical stage as an actor. Vernell is the co-founder of Writers’ Block Poetry in Columbus, a member of Delta Sigma Theta Sorority, Inc., and the human mom of the cutest doggie ever.