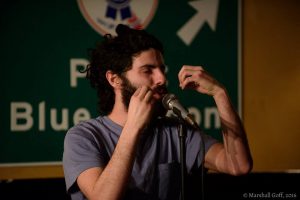 Joshua Elbaum has been trying unsuccessfully to escape poetry for the past three years.

Joshua helped to lead the Berklee College Slam Team to its first semi-finals stage at CUPSI. He has performed and taught workshops around the Boston area and has been published mostly by his friends. In 2015 he was nominated for a Pushcart Prize. A Young Adult fantasy villain, he is consistently underestimating and defeated by the power of love.