Tips from the Bar: While You Were Out 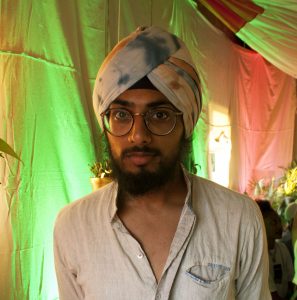 Poet of the surreal Manvir Singh. Photo by Stace Brandt.

Manvir Singh writes surreal stories and then embellishes them with flames, small crystals, and facepaint so that other people mistake them for performance poems. His mother thinks of them quite highly of them, an opinion she considers “objective,” whatever that’s supposed to mean.

Manvir has twice shared a Pushing the Art Forward Award and once received a stipend to study beetles in the Rocky Mountains. He has published two and a half small books, but none of them include poetry, except in the broadest sense. As of January 2016, he assures people that he wants to “destroy sincerity.” He currently resides in Cambridge, Massachusetts, where he pursues a PhD. Check out his work and whatnot at manvir.org and his newly-minted Instagram (@moon.var).