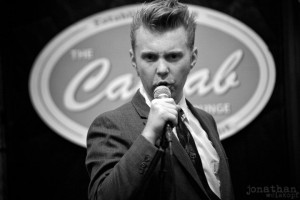 Christian Drake hosts at the Cantab Lounge during the 2011 National Poetry Slam. Photo by Jonathan Weiskopf.

Christian Drake is a six-time National Poetry Slam team member who has appeared on Finals stage three times: once as a competitor (Team Albuquerque 2009) and twice as an invited guest performer (2006 and 2007). This former Somerville resident has also been a host of the Berkeley Slam and Albuquerque, NM’s Poetry & Beer Slam, Oakland’s famous Tourettes Without Regrets variety show and the spin-off he founded, Tourettes Without Regrets ABQ. His poetry has been performed on at least three continents and covered by hundreds of high school forensics students, and he himself has performed in over sixty cities in the U.S. and Canada. He has never appeared on HBO, but has been featured on Al Jazeera.

Christian’s earned his reputation in the slam world by combining finely-crafted poetry with wild, rock-and-roll-inspired performance. A poet of outstanding variety, his repertoire includes poetry about heartbreak, music formats, war, nature, pornography, immigration, gardening, mythology, love, and the relative merits of period sex. He’s best known for his environmentalist message; currently a science teacher in the New England wilderness, his work as an aquarium naturalist, planetarium guide, urban forester and park ranger has influenced his craft. The effect is, to quote one audience member, ‘like nature poetry filtered through a guitar amp.’