Tips from the Bar: I Am From Betelgeuse Five

THE THIRD INSTALLMENT IN OUR LGBTQ MONTHLY SERIES, MOONLIGHTING! Click here for more information about Moonlighting. 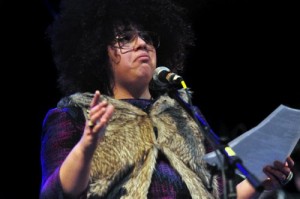 This month’s Moonlighting feature will be Casey Rocheteau, who began performing poetry at Hampshire College in 2003. She was a member of the first Five College teams at CUPSI. She performs throughout the country, at venues such as the Green Mill, The Cantab Lounge, and Portland Poetry Slam. She has lead a variety of writing and performance workshops for adults and students from middle school to college. She’s released two albums on the Whitehaus Family Record: Pump Your Concrete in 2008 and Chiaroscuro in 2011. She has self published four books: Roguish Young Things (2006), Keelhaul (2007), and List of American Rituals (2008), 11:11 (2009). Her most recent book, Knocked Up On Yes, was released on Sargent Press in 2012. Recently her work has appeared in Amethyst Arsenic and Side B Magazine. Casey was a member of the 2012 Providence Slam Team. 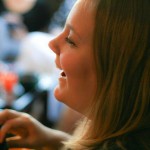 The show will also feature a mini-spotlight reading from Lisa Slater, a spoken word artist living in Vancouver, BC. Feminist, survivor, and community builder, her poems explore what it means to reclaim our bodies and identities from what broke us open and how we relearn love, sex, friendship and family in the process. Lisa was recently a finalist at the 2012 Individual World Poetry Slam and the 2013 Canadian Individual Poetry Slam. She is the 2012 Vancouver Poetry Slam Indie Champ, Erotica Slam Champ and Queer Slam Champ, as well as a five-year board member for Vancouver Poetry House and its current President.