Tips from the Bar: I’ll Come Back as a Hawk 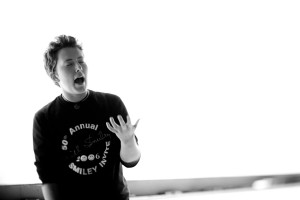 Miles Walser is a graduate of the University of Minnesota with a Bachelor of Individualized Studies in English, Social Justice, and Youth Studies. In 2010 he represented the U of M at the College Unions Poetry Slam Invitational (CUPSI) where his team placed 3rd in the nation and he was named Best Male Poet. He has also represented Minneapolis, Minnesota and Madison, Wisconsin at the National Poetry Slam and appeared in Group Piece Finals. In 2012 he won the award for Best Poem by a Male Poet at the Wade-Lewis Poetry Slam Invitational. His work has appeared in literary journals The Legendary, Used Furniture Review, and The Bakery as well as the audio podcast IndieFeed. His first collection of poetry, What the Night Demands, will be released on Write Bloody Press in April 2013.