Tips from the Bar: the Artie Moffa Prompt 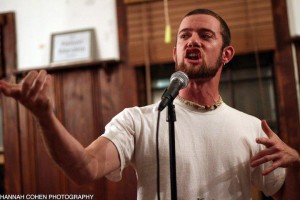 Beau Williams is a proud member of the NorthBEAST poetry scene and a three time member of the nationally competing Slam Free or Die slam team (2010, 2011, 2012). He had toured solo and with the poetry collective Uncomfortable Laughter alongside Wil Gibson, Ryan Mclellan, and Kait Rokowski. Now he performs across the country with Wil and Ryan as the group, GUYSLIKEYOU. Beau is a co-creator of the successful Zion Hill Poetry Reading in Newmarket, NH at the Stone Church performance venue.