Tips from the Bar: e.e. cummings It Ain’t 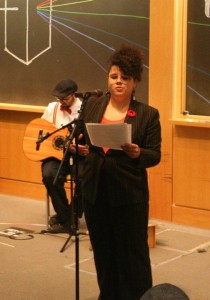 Casey Rocheteau began performing poetry at Hampshire College, where she was one of the leaders of the Slam Collective from 2003-2007. She was a member of the first Five College teams at CUPSI. She performs throughout the country and she has lead a variety of writing and performance workshops at colleges and high schools. She’s released two albums on the Whitehaus Family Record: Pump Your Concrete in 2008 and Chiaroscuro in 2011. She has published four books: Roguish Young Things (2006), Keelhaul (2007), and List of American Rituals (2008), 11:11 (2009). Her next two books, Wild Child and The Dozen are forthcoming in 2012. Recently her work has appeared in Amethyst Arsenic and Side B Magazine. Casey was a member of the 2012 Providence Slam Team.

This show in our weekly Wednesday series takes place at the Cantab Lounge, 738 Massachusetts Ave. in Cambridge. Doors for the show open at 7:15. The open mic begins at 8:00 and the feature performs at approximately 10:00. Poetry slam details are TBA.